english Your Own Place In Paradise - QP Jewellers Blog Skip to content
My Bag: 0 Item
There are no items in your shopping bag. 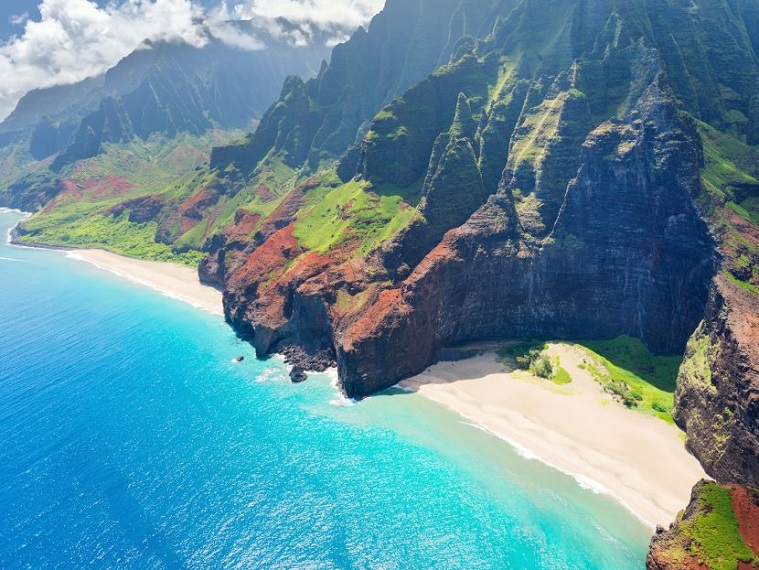 Your Own Place In Paradise

THE HAWAIIAN WEDDING has become something of a cliché after Hollywood gave it the dead horse treatment and flogged it into oblivion. It’s sad, really, when you consider the natural beauty of places like Kauai the ‘Garden Isle’, with its clear, lukewarm waters, soaring mountain spires and jungle-ridden cliffs.

Of course, the movies don’t have to change the romance of your every day, but, at the same time, it’s nice to feel as though one has gotten off the beaten track and found a place that few have ever been before.

We all remember the story of Prince William, right? The one where he went trekking around Kenya with Princess Diana’s priceless ring? We know how he waited until he and Kate Middleton were in a remote log cabin. We know they sought and found a respite from the world of eyes they were used to – a place without electricity, which was only accessible by air or on horseback. Yet we have no idea what happened in their quiet hideaway, aside from the significant fact that William proposed to Kate and asked her to be the future queen of England. What is most important, though, is that the moment was theirs and only theirs.

To show our appreciation to the wild romantics, those who dare to go that little bit further, we’ve pulled out our dusty old travel albums and compiled a list of our top five most beautiful and far-flung proposal locations. The Samana province of the Dominican Republic is an isolated haven for expats, with scattered villa communities nestled in the dense jungle, close to the beaches. The locals are lively, friendly and prone to introducing themselves, even if they don’t have anything to sell you. Mostly they live a wild subsistence lifestyle, fishermen comb the coral fringed coastlines and fruit sellers wander the pockets of known beauty that tourists often visit. If you’re lucky you might catch Humpback whales mid-migration. Sometimes they breach close to the white-sand beaches. Make sure you take your goggles as well and then you can swim with your loved one and encounter underwater societies of rays, turtles and puffer fish. There’s also a spectacular, rickety tree house village hidden in the jungle, which would be the perfect place for you to kick-back and celebrate (fingers crossed) your engagement. At the north-eastern corner of the Caribbean is the tropical island Vieques, known as Puerto Rico’s ‘little sister’. This tropical escape is ringed with white beaches, upon which lap the azure waters of the warm Caribbean Sea. It might sound like any other idyllic Caribbean island, but there’s one reason we chose Vieques as the perfect place for a unique proposal and that’s Mosquito Bay. Mosquito Bay is a secluded beach with red mangrove trees that edge the water, far from modernised builds. The water is just cool and deep enough with a small channel that keeps blooms of dinoflagellates inside the bay. This gives the bay some of the most bioluminescent waters in the world. Just imagine sitting there under a starry night sky and watching the disturbed black water flashing green, then twisting with bright, neon-blue tracer lines as little fish dart beneath the surface. Polignano a Mare is a town and commune on the coast of the Valle d’Itria in Italy. The culture is mostly sustained by farmers and fishermen who pluck the town’s prosperity from the Adriatic Sea. You can walk the winding white-washed streets and discover hidden pearls of Roman architecture and quaint, old churches like the Chiesa Matrice. However, none are quite so suited for a proposal as those elegant restaurants perched on the wave-carved limestone outcrops, where you can dine in luxury with the crystal waves swirling and thrashing below. It’s just an added bonus that Polignano also hosts the Red Bull Cliff Diving Competition – a rare and enthralling spectacle that, if you time it right, would be a great date for you and your bride/groom to be. Flores, Indonesia, is known by tourists for the sleepy port of Labuanbajo that’s used as a stop-off on the journey to the Komodo National Park. But it’s not just the dinosaur-esque komodo dragons that give Flores a preternatural, edge of the world feel. The islet crowded bays are ideal for boat trips and also popular snorkelling and diving. Inland the serene, far-green country is covered with fragrant forests that snake in all directions and often cradle empty white beaches Meanwhile the skyline is occupied by rugged volcanoes that hold hidden lakes of vivid turquoise. It would surely be an adventure an unexpected, prehistoric location for your proposal. Sitting on the slope of the Dhauladhar Range is the peaceful Indian refuge, McLeod Ganj. This suburb of Dharamsala is backed by a panoramic vista crowded with the snow-capped foothills of the Himalayas. It is also the heart of Buddhism, as it is the home of the Dalai Lama and the Tibetan government-in-exile. The serenity seems to envelop the mostly Tibetan population and the atmosphere is somewhat sanative. It is also electrifying to see Tibetans freely practicing their culture, protected by Indian democracy. Scattered throughout the hills are several monasteries built around trees that grow through holes in the floors and ceilings of their many tiers. Golden shrines and engraved prayer wheels gleam in the sunlight, while monks in orange robes debate and dance in the open squares, shaded by the surrounding forests. We could think of nowhere more demonstrative of love.