english The Journey of a Diamond Ring | Mining - QP Jewellers Blog Skip to content
My Bag: 0 Item
There are no items in your shopping bag. 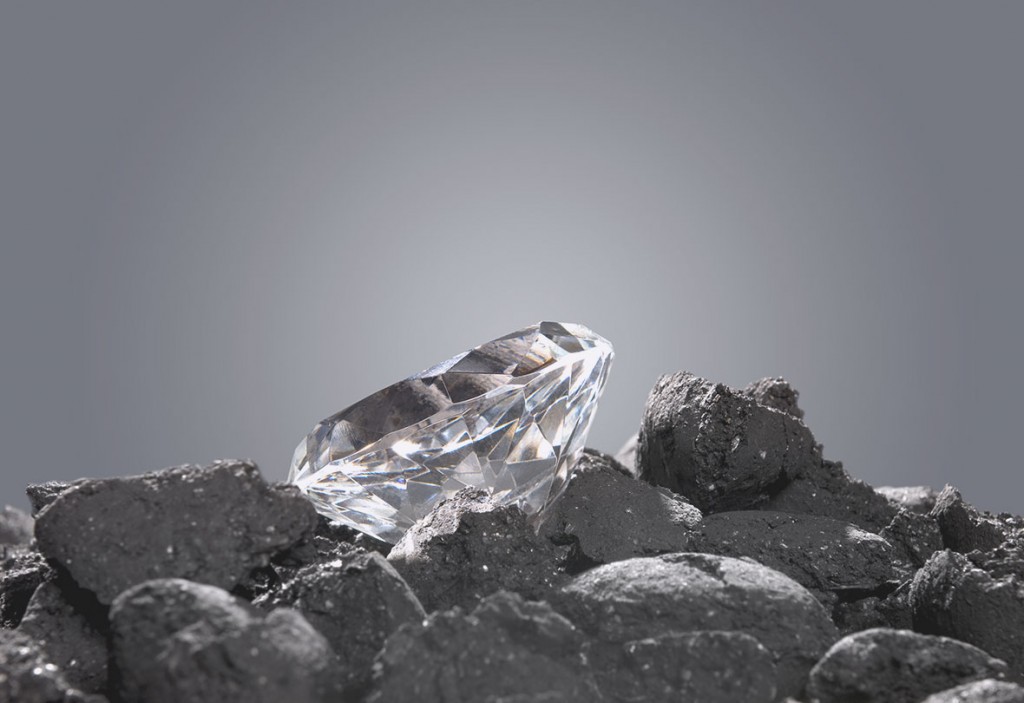 The Journey of a Diamond Ring | Mining

THE VERY FIRST STEP of this complex process begins one hundred miles underground when an incalculable mixture of heat and pressure moulds crystallized carbon into rough diamond. Gradually, over millions of years, diamonds are pushed to the surface through a kind of volcanic eruption called a kimberlite eruption. This phenomenon occurred several times during the Cretaceous Period, 146 million to 65 million years ago, when the Tyrannosaurus Rex roamed the earth. According to geologists the last one on record happened some 25 million years ago.

At the point of eruption deep fissures in the earth’s crust, called Kimberlite pipes, are used by magma flows that shoot up towards the surface. Forced through rock-encrusted veins the diamonds and minerals rise through the mantle and crust in a matter of hours. Next, the magma is gradually cooled inside the kimberlite pipes creating conical rivers of kimberlite rock speckled with diamonds. But the question is: how do we extract the diamonds from these kimberlite pipes?

In some cases, geologists use termites to find and tap into kimberlite pipes. Termites offer clues as to where diamonds are hidden since they build their piled mounds using rocks, dirt and minerals, within which vestiges of the gemstone can be found. Most often, though, the modern world provides a simple answer and contractors wheel-in the heavy machinery, using huge hydraulic shovels and trucks to pull the diamonds from the kimberlite pipes. Usually diamonds are mined from depths of about 14 – 90 meters.

Open Pit Mining is the employed method of extraction when diamonds rest close to the surface or are concealed by nothing but a sheet of sand or gravel. Contrary to what the name might suggest these mines aren’t just big gaping holes. In actual fact they’re shaped by a series of ledges dug at neat angles to prevent any structural weakness.

Underground Mining is used if a region is unstable or if manual open pit mining is likely to be too costly, preventing the build. In this scenario underground mining is carried out to reach those resources that would otherwise be inaccessible. The process facilitates the dissolving of deeper kimberlite pipes through the use of intricate networks of buried tunnels. The amount of diamonds is measured by calculating the carats per ton of material, although the value decreases as the miners delve deeper into the kimberlite pipe. Underground mining also depends on an estimation of how long the mine will last, regarding the occurrence of diamonds, at what depth they can be found and whether it would be viable to continue using open mining techniques instead of going underground.

Horizontal Mining involves a sub-sea mining crawler with flexible hoses that snake across the ocean floor and bring diamond to the surface from seafloor deposits using a suction nozzle, without the need for divers.

Vertical Mining involves a hulking diameter drill that can plunge to a greater depth, churn through diamond-bearing gravel and whip it up to the surface.

Alluvial Mining is derived from the Latin word ‘alluvius,’ meaning ‘to wash against’, which provides an insight into the process. Alluvial diamond mining takes place in riverbeds and beaches, when diamonds have separated from their eroded host rock. Firstly walls are built to hold back the water and sand that’s rich with diamonds. Then the big machinery rolls in to sift through tons of earth until the loose deposit and diamonds are uncovered. So, once the respective mining method has been successfully carried out, the refinement processes ensue. The first step is called comminution, which refers to the breaking of ore through crushing and milling. Then, after the ore has been ground-down, it’s mixed into ferrosilicon slurry as part of a process called dense medium separation. This involves a greased conveyor belt that grips the diamonds, which repel water and stick to grease, and separates them from the crushed ore. The final stage begins with categorisation of these precious mineral batches. Rough diamonds are sent through DeBeer’s Central Selling Organisation (an established conglomerate comprised of independent companies with head offices in England) to be cut, sawed or adapted for industrial purposes.

Throughout a lengthy and carefully supervised process the diamonds are sorted into myriad categories determined by their weight, colour and clarity. Mostly advanced automation is used to sort through the collected diamonds, however experts are always on hand to scrutinise individual pieces and aid the categorisation. It’s astonishing – really – there are around 5000 subcategories listed under the three primary categories for rough diamonds, which are gem quality, industrial quality and boart (small opaque diamonds popular for cutting tools). When the diamonds are each identified they’re conclusively cut, sawed and polished until the rough edges have all been smoothed. Once the manufacture is complete they’re then shipped, flown and driven off to avid makers and wholesalers all around the world.