english Peridot, And Other Revelations - QP Jewellers Blog Skip to content
My Bag: 0 Item
There are no items in your shopping bag. 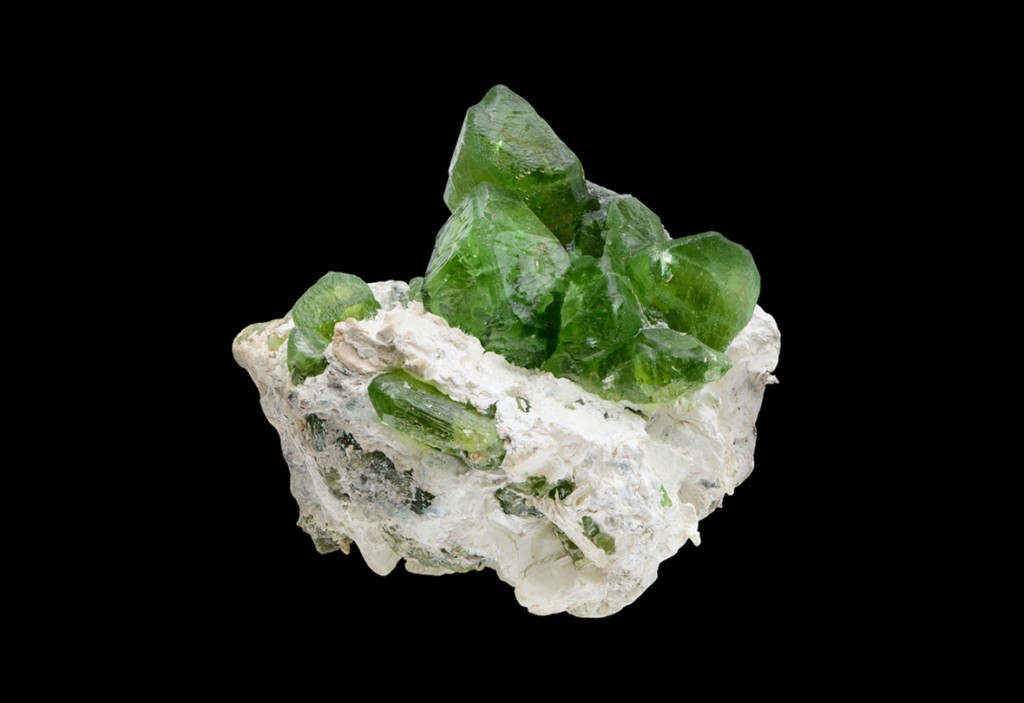 Peridot, And Other Revelations

PERIDOT IS UNDOUBTEDLY A REMARKABLE STONE, which, like Emerald, is only ever one colour. It is also a very delicate stone, handled with great care by cutters due to the fact the facets on the pavilion are so integral to its effusion. As far as we’re concerned its damp ever-green glow never fails to evoke a pensive mood and an image of a forest made verdant by rainfall. But Peridot is so much more than a colour and, anyway, while it might appear to be only green, if you look close enough you’ll also find a deep and almost imperceptible glint of gold. This glint is the reason for Peridot’s original name, Chrysolite, which is derived from the Greek word ‘chrysolithos’, meaning ‘golden stone’. We think that searching for this hidden Gold is like trying to find a star embedded in the depths of space. In fact, while we’re on the subject, that’s the real reason we find Peridot so fascinating; it has such a close affinity with the celestial bodies that surround our planet.

Not many people know this but in October 2003 NASA’s Mars Global Surveyor detected Peridot in its basic form, ‘olivine’, on the surface of Mars. It was found uncovered in a shallow depression called the Nili Fossae. Supposedly this region was formed almost 3.6 billion years ago when a colossal asteroid ploughed into it. This asteroid dinted Mars and left a crater called the Isidis Basin. It also inadvertently excavated the ‘olivine’ buried beneath the surface.

Through this discovery it was found that Peridot has extra-terrestrial properties and is thereby, essentially, traceable to some of those myriad luminaries that crowd the cloudless night.

Suffice it to say that we rather like this idea; we think that being born of a star, just like ourselves, is a rather fitting origin for a gem that can store sunlight and light up the dark.

So it’s almost August and we couldn’t think of a better stone to mark the end of this July, which has been one of the most significant months in the history of space exploration. It used to be that space was only a roof, beyond which we could take only our dreams. However NASA’s New Horizons probe, the fastest spacecraft that has ever left Earth, is now at the end of its nine year mission to photograph Pluto. For so many years this little planet had been kept from us at the farthest, coldest edge of our solar system. All we knew of its unseen face was gleaned from artistic interpretations and blurred, blocky and, frankly, incomprehensible images. But now we’ve seen its youthful surface, spiked with Ice Mountains rising 11,000 feet above the planets crust of water-ice bedrock. Then, as if that wasn’t enough, this staggering flyby has been followed by NASA’s sudden discovery of Kepler 452b, the hitherto closest twin to Earth they’ve found, which is 60% larger in diameter, making it a kind of super-Earth. According to the U.S. space agency Kepler is one of roughly a billion Earths – termed ‘rocky planets’ capable of supporting life – scattered throughout the Milky Way.