english The Journey of a Diamond Ring | Decoration - QP Jewellers Blog Skip to content
My Bag: 0 Item
There are no items in your shopping bag. 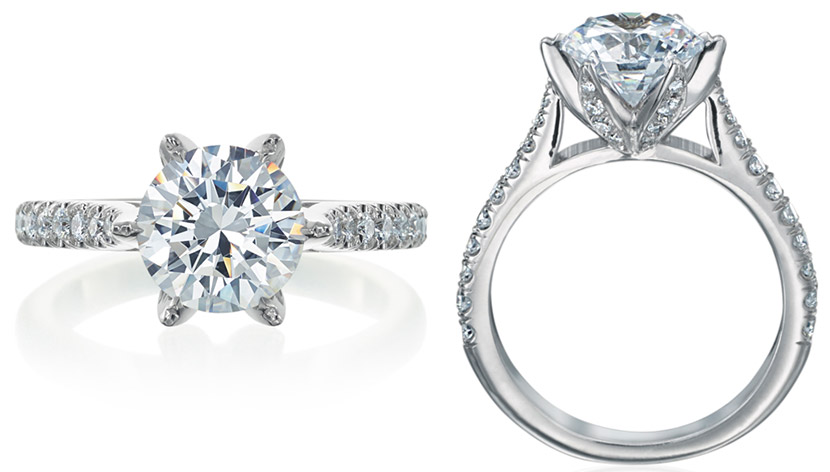 The Journey of a Diamond Ring | Decoration

FOLLOWING THE DETAILED DESIGN PROCESS, the final stage in the journey of a Diamond ring begins with the rugged finished of a rough ring, created through casting.  Now the ring has to be filed and carefully ground using sensitive tools. This is done until the body surface has been made smooth, at which point the artisan will usually stamp on their trademark and etch an indication of the carat weight into the metal. The next step involves the ring being hammered and rounded, whilst placed on the mandrill. Then the neatly shaped but unburnished piece will be handed over to a polishing specialist. After that it needs to be gently pressed against several buffing wheels, giving it the bright gleam we associate with high-end luxury. Finally the polisher passes the newly shining ring to a gemstone setter, who straightens the prongs in preparation for the Diamond.

Formed in the Earth’s crust, under conditions of incalculable heat and pressure, Diamonds have long been prized for their unique, crystalline beauty. When placed in a ring the process of utilising the Diamond’s potential becomes intricately complex. To start with the crystal is placed in a high-tech Sarin Machine used for mapping both rough and polished material. This provides the Diamond Cutter with the visuals they require to discern a cutting pattern so as to yield the largest Diamond with the highest clarity. Responsibility is then passed onto the Blocker, appointed as the lead cutter and caretaker of the Diamond from its rough to polished state. After the mapping is complete the Blocker will analyse the information provided by the machine. This information allows them to scrutinise the shape of the Diamond and plan their approach for cutting it. In some cases the mapped rough crystal will be cut through the middle making two equal Diamonds. Other times the cutter will attempt to coax a much larger Diamond out of the rough crystal, in which case a small segment is often left, called a ‘toppy’. The Blocker will then shape the Diamond until it has four sections on the pavilion and the crown. This leads onto the placing of the angles used to enhance the brilliance of the crystal. A cushion-cut Diamond, which is the one we’ll be referring to in this blog, can be very time consuming to produce and is almost entirely shaped by hand. The process necessitates the use of an angle gauge which measures the four square facets and allows the Blocker to divide them into eight squares.

What’s happening at this point is the Diamond is undergoing the earliest stages of the symmetry process. This involves another skilful artisan, known as the Brillianteer, who cuts the remaining facets of the Diamond and takes care of certain aesthetic touches, like dispersion and scintillation, which refers to the movement of the light as the Diamond moves. Next the newly faceted Diamond is placed on a fined wheel, although the Diamond quickly heats up and so it can’t be held against it for long. Overall this process takes up to four weeks and is a precarious but also very rewarding business. While the art of diamond cutting has experienced great leaps in many respects, evolving from ancient foot-driven wheels and furnaces to modern mapping and automated technology, it still relies on the essential human element provided by Cutters, Brillianteers and the like. Once the Diamond is ready the ring is tended to with a drill bit that carves out the inside of the prongs (depending on the design). These carved slots will eventually fit the edges of the Diamond and hold it securely in place once the prongs have been readjusted. Finally the finished ring will need to be immersed in an ultrasonic machine, which uses vibrations to get into every imperceptible gap and thereby washes the ring in its entirety. This is followed by a little cherry on the proverbial cake – a quick blast of hot steam to blow away any residue.